A cozy family retreat that is an epitome of sustainability 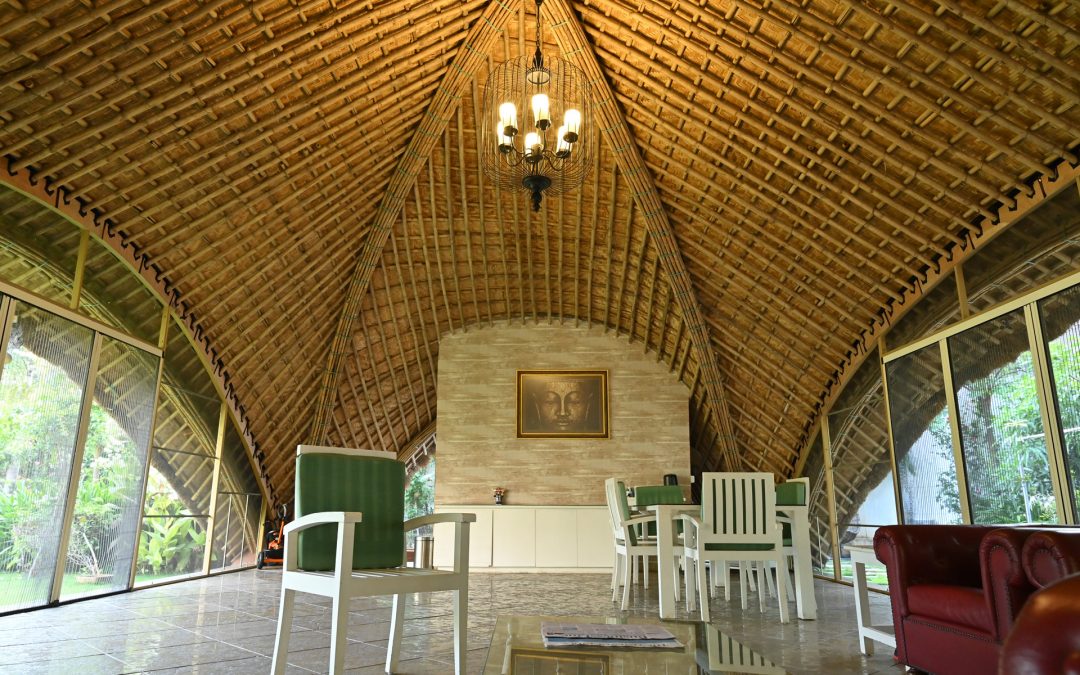 Bamboo has been part of construction ever since humans started building shelters. Over the years, the usage of bamboo persisted majorly in the regions of South Asia, South-East Asia, East Asia possibly owing to its cultural relevance in these regions or easy availability. However, the growing concrete jungle is making designers rethink sustainability and construction material choices. And slowly but steadily, bamboo is making its way back to construction and gaining popularity among people who are conscious about the earth and ecosystem.

Well, bamboo is undoubtedly a sustainable material and the distinctive rhizome-dependent system of the plant makes it one of the fastest-growing plants in the world. Bamboo is a renewable natural material and is a remarkably handy resource with multi-usage. Considering all these characteristics of this incredible material, our designers are exploring the potentials and experimenting with sustainable bamboo structures.

Let’s take a look at one such bamboo hut made for a family who wanted to build a gathering place for their huge joint family. The initial idea proposed to them was a state of the art building with all modern facilities. Though the family liked the design, they were profoundly fascinated with the bamboo clubhouse that we developed at Organo Naandi, a sustainable farming community. Since it was a personal retreat right outside their house courtyard, they wanted to go with a similar sustainable structure.

It was an open plot adjacent to their house which needed a complete makeover. Our designers came up with a plan of a domical bamboo structure, a self-sustaining bio pool, a small gazebo, and plenty of open areas with panoramic landscaping. The family loved the idea and gave a hundred percent go-ahead to the design plan.

A bamboo hut with a nearby stream is anything but magical. For this outside retreat area, our designers planned to build a dugout natural pond with exotic aqua life and plants. To make it more sustainable, gunny bags were dipped in cement and layered with chicken mesh instead of concrete. Once the base was laid, it was filled back with soil and stratum. Simple mechanisms were used in making this bio pool with water, aquatic plants, fishes, etc. The water quality inside the pool was in fact managed by the pro-bacteria which was growing along with the pool. A beautiful gazebo area was also built on the pond side for experiencing relaxed leisure moments. To bring this ‘Living Aquatic System’ to life, we had collaborated with the Rufus Monterio team from Bangalore who is a specialist in building living aquatic systems.

The landscape around was also developed meticulously with the idea to give greenery and privacy to the area. The plant palette in this garden ranges from Comocarpus, Filicium, to Silveroaks. All these plants for the landscape were procured from local nurseries which were also a reason for the cost-effectiveness.

The bamboo hut is the show-stopper here that can facilitate all their family gatherings. The base of the bamboo hut is made of large arches that are embedded in concrete for an area spanning 7 meters by 11 meters. There were a total of 6 arches locked in concrete which were based on 4 columns. Bamboos were bundled and clamped together with industrial crimping machines so that it doesn’t get warned off. The bundling was done in such a way that it locks in itself with the arrangement that overlaps with one another. Other than these, reinforcement rods were also put together to act as guidance. The domical shape of the structure also helped in transferring the load to the edges from the centre.

Since it was made as a sustainable structure, locally available material and labour were used for construction. The entire bamboo for this structure was brought from the Bhadrachalam forest area. Even the treatment of the bamboo was done the country way where it would be soaked in water for days and later dried and applied pest repellents for protection. The roof thatch was also procured from the local areas for this very reason.

The low-hanging roof design of this bamboo structure is a careful design approach by our experts. It provides ample shade that helps in reducing heat gain and makes the structure significantly energy efficient. The exotic variety of plants outside and the natural heat reduction makes the temperature inside the bamboo hut very pleasant.

When it comes to construction using bamboo, the major challenges are sun and rain. The low hanging roof design was one primary reason to fight these challenges. The domical structure aided in stopping rain splatter from entering inside the building. Same as the case with direct sunlight. Another major challenge for bamboo construction is the possibility of pest attack. If the bamboo is not cured correctly, the chances of pest attacks are more.

For this particular structure, the dense plantation and water bodies around it invite more pests. Our experts came up with an easy and sustainable solution to this problem through the establishment of mosquito mesh. It helped in controlling pests from entering the bamboo hut. An added benefit to this was that evenings inside the hut became even more pleasant with zero mosquito problems. The open areas helped in proper ventilation that reduced the need for switching on fans making it more energy-efficient.

The maintenance required for bamboo structures is less compared to other construction methods. The durability can be managed with some care and attention that includes replacing damaged/spoiled bamboo (reclamping can be done with new bamboo), pest control, replacement of thatch every 3 years, etc. Though bamboo has the characteristics of being fire retardant, the thatch is not. Hence, some precautionary methods such as damping the thatch during summer or festival times can save it from accidents like fire.

The best part of bamboo structures is that the overall construction cost is drastically different from conventional structures. This entire personal retreat area was built for an approximate cost of 18 to 20 lakh. Local materials, local labour and the understanding of the client to not wanting to last it forever made the construction cost extremely low.

With such projects, what we are aiming at is to bring bamboo into the mainstream as a construction material that is sustainable in all its aspects.

Round the clock, all through the days, this bamboo hut changes its form from being a meditation hub to a party hall, a gathering space so on and so forth.