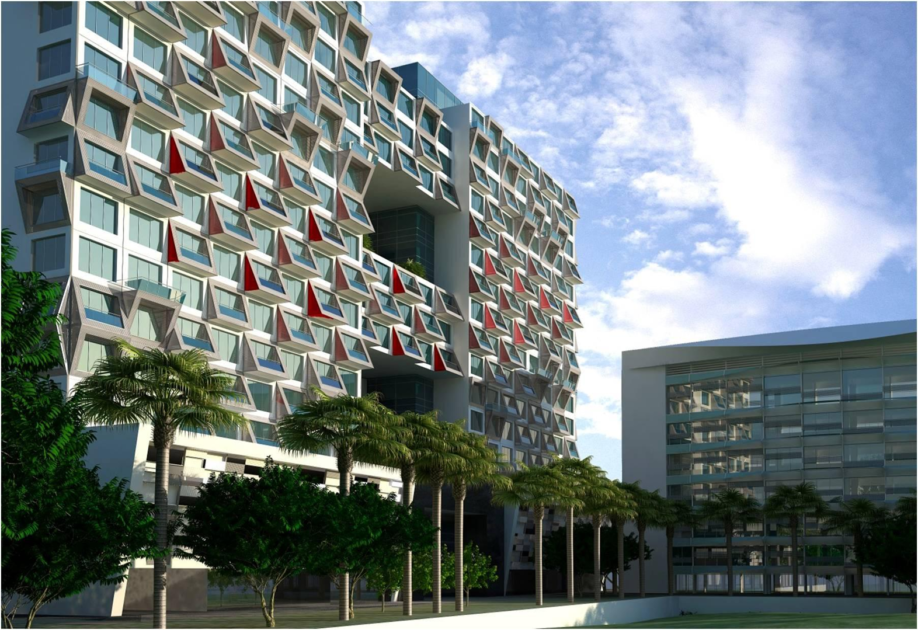 The building façades are not just the skins of the structures that give its face value externally. They cannot be purely a result of aesthetic dimensions (decorative) nor only for controlling internal climate, a safeguard from the fluctuation of the weather outside. They are operated from both internal and external flows and constraints. Conrad Waddington, a developmental biologist in his “epigenetic landscape” explains this operative nature of the façade intensively. Waddington’s model consists of an undulating sheet of the suspended surface with underside ‘tied down with a complicated network of guy ropes which are attached to the pegs’. These are representations of genes and their interactions – internal constraints of the system. As the diagram indicates, the course of the slope of any valley is a result of the tension that excretes by these ropes. Above the surface, the rolling marble represents the cell’s future where any sudden external forces accelerate the momentum and define its pathway in differentiated surface valleys. The following projects showcase FHD’s approach towards defining those internal and external conditions/parameters that would shape the façade of the building.

The typology of office tower design has generally remained unchanged for the last few decades. Large open floor plates with as much unconstrained adaptable interior areas catering to single or multi-tenant, primarily in the IT sector, have been the norm.

The challenge raised in this project is to create an affordable model of offices for the small scale industrial sector where office sizes are never more than 45-50 Sqm. This unique requirement led us to create a module-based approach to the design with each self-contained unit accommodating up to 8 staff members.

The reduced size of the office meant that amenities like meeting rooms, lounging areas had to be brought into a communal space shared by all offices. The modules are congregated into two towers that are connected with special bridge offices that offer such communal areas like cafes and rentable board rooms with large triple-height terraces.

The façade is an aggregate of many independent entities working together as a collective whole, like leaves ruffling in a tree- fully reflective of the multiplicity within the building. It is animated by a parametrically varying repetition of double-height balconies. The parametric logic of these balconies allows variations in depths, angles, and location-based on office sizes, creating various sub-conditions and variety within the module. The modules are identified by various combinations of selected types. These types are distributed across the surface to evaluate their densities and created a matrix of density variation from high to low. This density differential creates a differentiated self-shade across the façade.

Modules are defined by balcony type and sunshade type. The combinations of these two typologies will generate various conditions that are used to study the density variation by those.

These various typological combinations are distributed and studied its various densities and shadow casts in relation to their depths, angles, and location. Various patterns were evaluated with its distribution of those modules and their quantities. The economy of the individual typological combinations was studied for all the generated patterns. The selected pattern displays the least amount of variations of those types and only 5 typologies were utilised. The selected pattern is being appropriated to build mass that was defined by the programs earlier and highlighted the flow of the pattern across the façade.

The sides of the pre-engineered balconies are made from powder-coated perforated aluminium panels, which incidentally are manufactured by the client’s factory. Switch balcony tower is a result of the operation of internal parameters inherent in its program with an external parameter of minimising solar radiation on the façade by shading. The aesthetics of the multiplicity are defined not from a top-down wholeness, but from the aggregation of individualities that defines its totality.