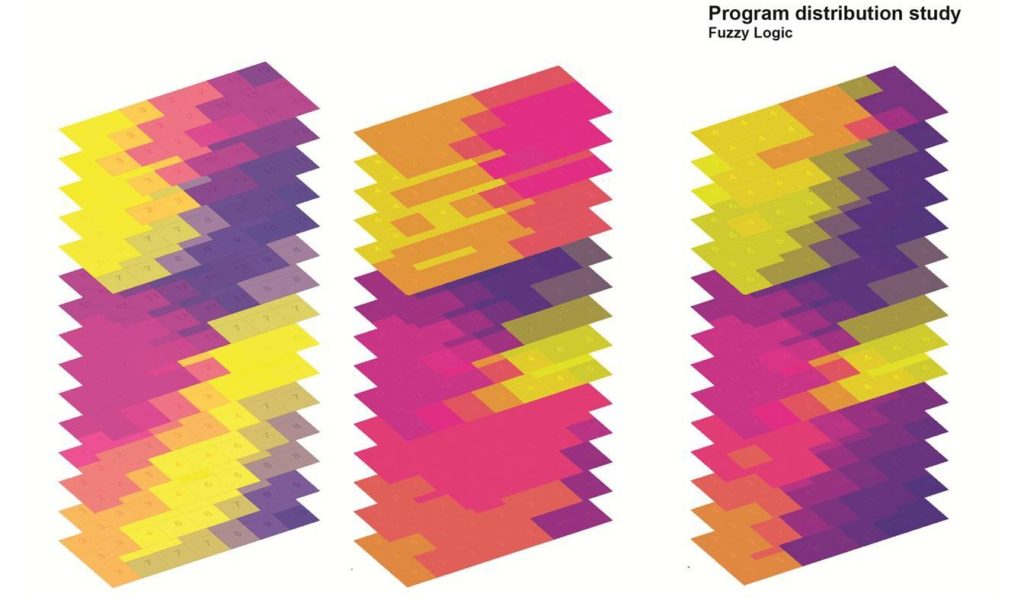 In FHD, Our explorations on parametric methods expand from a simple 2 dimensional pattern (flooring, roofing pattern or screen) to a complex program distribution and urban level organization methods. For the past 6 years we have explored different levels of approach in parametric methods to see how we can expand our “design space” to generate certain specific (unique) “local” solutions appropriate in response to the user.

It is an attempt to bring the ‘Indian streetscape‘ values of communities back into the contemporary (vertical) living. The traditional streets of south Indian regions are usually flanked with “thinnai” -a public realm of private homes. It facilitates all inhabitants to actively participate and encourages a cohesive living environment – where people actually live their life. It could vary from a simple conversational sharing, playing, a business engagement (selling goods) to a place for showing hospitality (“Viruntompal“) or a resting nook on a lazy summer noon.

We are interested in how we approach/facilitate these “cohesive-spaces” in a contemporary living that is vertical – a typology which literally means to make it apart – “Apartment”. Against this tide, we explore how “Togetherments” can bring back the lost values of horizontal streets with their compulsions of living together.

Instead of discrete spatial definition, ‘togetherment spaces‘ are designed in a fuzzy manner. We focused more on the interactions of discrete functionalities and their transformations of one into another. By using the color distribution method with their blurry zones we define those cohesive spaces. First, the programs are coded with gradations and these gradations where grouped under categories of Relax, Fun and Learn.

Spatial typologies are identified with their appropriate discrete programs

The Generator (point) for each group is been placed in the volumetric space (which are cuboids with multiples of 10x10x10 ft). These inflicted points with that tri-color gradation will interact between them to create blurry zones and subdivide the volume into multiple scales. These colors are evaluated and assigned with respective programs to distribute with their required spatial configuration (transform from a completely closed (discrete) program to a completely open green space)

An analysis of the distribution of programs and their color codes

An analysis of the distribution of volumes and their scales

Defining the spatial configuration with respect to color and program type.

In this award-winning competition entry for “Building for a Billion,” we explore the possibility of using a Genetic Algorithm to achieve certain objectives to create the most conducive environment for a community to flourish. It is a “bottom-up approach” where the qualities of the community space (Visual Connectivity, Solar radiation, Green space, Interaction) were defined to generate a variable layout that would in turn define a higher order of urbanscapes.

Organo would like to explore more than what is been explored in Organo 1.0 on sustainability aspects in their new Organo 2.0. This is an attempt to incorporate a logical method to address the sustainable principles in the early conceptual stage in terms of space planning, energy reduction, and passive strategies.

The site is been made into multiple quadrangles with their boundary edge and internal nodal points. These quads were evaluated against its land distribution against unit numbers. Nodal points were distributed in terms of its distances (walkable, connectivity and drive experience)

With the Genetic Algorithm, these model points were evaluated against its distances between themselves and connected through the network. These networks are organized with the villa units flanged on either side of the connectivity with the appropriate land area around each villa.

The next article will lead you to FHD Group’s manifestations on “Switch balcony and Opacity vs. transparency”. We will walk you through works done by FHD Consultants, demonstrating how parametric design approaches have obtained multiple design possibilities at Master Plan Level and organizing methods on program.